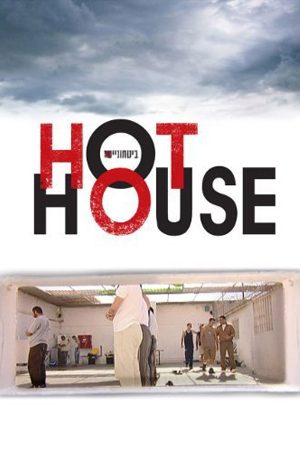 With chants of ‘no cease fire, no surrender,’ Palestinians demand the release of their loved ones who are mostly young men in their late twenties and early thirties. Almost every single Palestinian family either currently has someone in prison or has had a family member in prison at some point in time. Many of these prisoners were involved in terrorist acts involving suicide bombings and other questionable political activities. Regardless of what the particular crime might have been, they consider themselves ‘freedom prisoners’ who did what had to be done in order to liberate their land. A good number of these young people have been sentenced to life in prison.

The Hot House is the highest security prison service in Israel, housing about 10,000 men and women. This documentary was filmed on location and it questions whether these prisons are really suppressing violence or simply strengthening the Palestinian cause.

Personal interviews with detainees and prison guards point to the fact that violence on the outside is not diminishing at all, whereas imprisonment actually grants Palestinians the opportunity to deepen their ideological and political education. What this means is that these young prisoners who enter the system with very little formal education often get the chance to become articulate advocates of Palestinian nationalism.

Within the prisons there exists an intricate communication network among the various cell blocks which are grouped by political affiliation. The organization that functions behind prison bars is very similar to the one on the outside. They live in separate blocks and carry on their lives much as they would if they were not incarcerated.

There are no windows, so prisoners never get to view what’s happening on the outside. Hence the television has become their window to the world.

Some of the more unnerving moments in this film are when inmates state why they are currently behind bars and what they plan to do after they are released. Many of them show no remorse for planning attacks that took the lives of innocent civilians, including children. This stimulating documentary shows just how Israeli prisons are inadvertently functioning as a significant training ground for future Palestinian leaders. Watch this film now.

Sailing ships, stars, angels and executioners — The Mark of Cain chronicles the vanishing practice and language of Russian Criminal Tattoos.

Dubbed the “Bangkok Hilton” by the West, Thailand’s Bangkwang jail is one of the most notorious prisons in the world. Until now, the reality of life in Bangkwang has remained a secret.