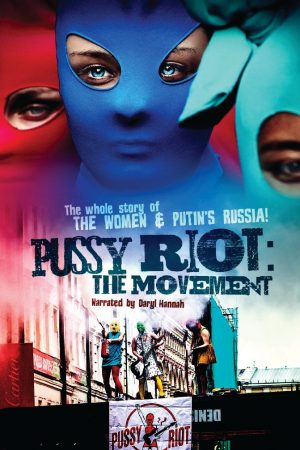 About six decades ago Rock and Roll changed the world with its dreams of love and peace. It gave artists the power to speak out with a message that was uncommon at the time. Many thought the genre was subversive and even indecent, but freedom of speech prevailed.

Pussy Riot is a Russian feminist Punk Rock band that was formed in 2011. The government tolerated them in spite of their messages about freedom of speech. These brilliant young women demanded their right for artistic expression and in so doing, they captured the world’s attention like no other dissidents before them had ever been able to. They quickly became a global symbol of freedom.

Other artists understood their calls for separation of church and state. Pussy Riot was opposing the church’s open campaign to re-elect President Putin. Apparently Russia was on a backward slide to becoming a totalitarian government and these women wanted their children to grow up in a better country. However although many international artists supported Pussy Riot, the majority of Russians criticized their methods of protest.

Then on February 21, 2012 they stood on the altar of the Church of Christ the Savior and asked the Virgin Mary to rid Russia of president Vladimer Putin’s dangerous and harsh regime, which was beginning to resemble Stalin’s. This was the straw that broke the camel’s back. And so it was that two weeks later, two of the members were arrested and denied access to their spouses and young children for a period of over six months. The charge was hooliganism and they were not allowed to have legal council until shortly before the trial.

In their closing statements, the two arrested women spoke about their fears for the Russia that their children would be forced to grow up in. They spoke about how history was repeating itself. Despite the threats of being isolated from their families, the women stood their ground.

Their story rippled into an international outcry by many artists, and this has given protestors the courage to press their case against the Russian President and his harsh regime.

This interesting film will keep you on the edge of your seat. It

Russian prison colonies are dangerous and scary. In order for these women to make it out alive they need to remain in the eye of the international media. Watch this film now.

This animated short film won Best Short Documentary at the Melbourne International Film Festival in 2015. The story is narrated by two men who were detained at Australia’s Manus Island Offshore Processing Centre.