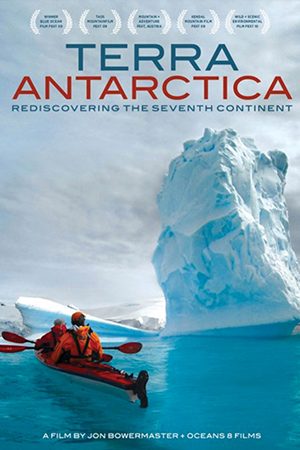 The Earth can be seen as a single complex system with Antarctica as its heart. While some people think that the Seventh Continent is a fortress that is far removed from the negative influence of humans, the reality is that external forces are seriously impacting it and everything is changing at a rapid speed.

In 1989 National Geographic correspondents visited Antarctica for the first time and documented a seventh month long crossing of the Continent by dog sled. Since then the changes in this part of our planet have been evident. Since 1959 an unusual international treaty was signed between twelve nations. This treaty continues to govern the continent. The Antarctic Treaty demands that tourists leave nothing behind except footprints. It also requires that visitors provide their own search and rescue in case of emergency.

As the crew emerges from The Drake Passage and nears Antarctica they spot their first iceberg. It is an old one, now blue because the oxygen has been squeezed out. Nothing introduces Antarctica more powerfully than these icebergs.

Their first stop is on King George Island to pick up the kayaks that were stashed there. This island is part of the South Shetland Islands and it’s home to eight international research bases. It has a runway that’s long enough to land big cargo planes. There’s also a school, a church, a post office and even an ATM, as little by little humans from different nationalities have started taking over the place.

This extraordinary film documents National Geographic’s sea-level exploration of the Antarctic Peninsula. For six weeks the crew travelled by kayak, sailboat, small plane, and foot in order to observe the evolution of this most remote place. Antarctica has been seriously impacted by climate change. Evidence of this is the fact that temperatures have warmed along the Peninsula faster than anywhere else on the planet during the past 50 years. Add to that the tourism boom and international property rights battles. All of this takes place while its ice slowly disappears.

Many years ago when there were no humans, there were great apes, very similar to the ones we know today. New research is underway to uncover and understand the unique regional behaviors of wild orangutans.

The Franz Josef Land archipelago is the northernmost part of Russia and also the furthest from the continent, just 900 Km away from the North Pole.

An Island Full of Plastic

Located between North America and Asia lies an island the size of Texas. This island is made up completely of human garbage: a sludge of plastic, metal, and decapitated Barbie dolls – and the island is growing.

In much the same way as an operator’s manual gives you important information regarding your car or refrigerator, Earth Science can do the same for the planet.