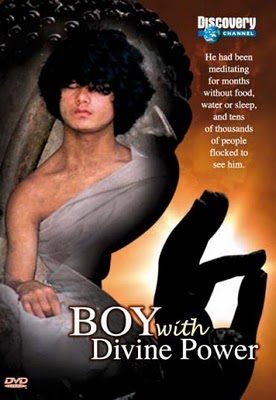 The Boy With Divine Power

Ram Bahadur Bomjon (born c. 9 April 1990), also known as Palden Dorje, and now Dharma Sangha, is from Ratanapuri village, Bara district, Nepal. Some of his supporters have claimed that he is a reincarnation of the Buddha, but Ram himself has denied this, and many practitioners of Buddhism agree that the Buddha has entered nirvana and cannot be reborn.

He drew thousands of visitors and media attention by spending months in meditation. Nicknamed the Buddha Boy, he began his meditation on 16 May 2005. He reportedly disappeared from the hollow tree where he had been meditating for months on 16 March 2006, but was found by some followers a week later. He told them he had left his meditation place, where large crowds had been watching him, “because there is no peace”. He then went his own way and reappeared elsewhere in Nepal on 26 December 2006, but left again on 8 March 2007. On 26 March 2007, inspectors from the Area Police Post Nijgadh in Ratanapuri found Bomjon meditating inside a bunker-like ditch seven feet square.

Over the following years after this documentary, Bomjon has reappeared and blessed thousands of pilgrims – only to disappear again and meditate.

Photographer Chris Jordan discusses his Midway Project; a fine art photography series documenting the tragic phenomenon of the death of the local albatross population due to excessive intake of plastic from the Pacific Garbage Patch.