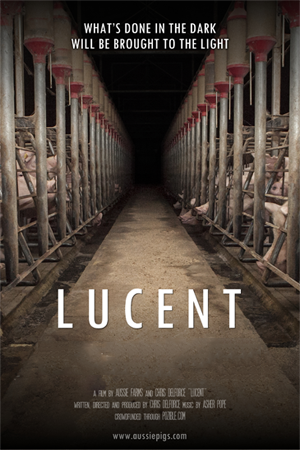 Pigs are extremely intelligent animals. Much like humans, they have their own personalities, quirks, likes and dislikes. Pigs pick up tricks faster than dogs and can even learn to respond to their names when called. Pigs are also very social animals and they communicate with each other constantly through a series of sounds. Despite popular opinion, if given the choice pigs will go to the bathroom far from where they eat and live.

Pigs also have very powerful maternal instincts. Some studies show that they make sounds similar to singing to their young.

This documentary was filmed over a two-year period with footage from over 50 piggeries and slaughterhouses across the Australia. The film depicts what has sadly become standard industry practice for pigs that are bred for food.

At the pig farm a sow is confined to a cell that is so small that she can only stand, sit, or take a step forward or backward. There is not enough space for her to turn around. There the sow remains for up to six weeks at a time after being forcefully impregnated two to three times every year. This situation causes the number of stillborn or mummified piglets to increase dramatically. During the six weeks of confinement, the sow is never exposed to sunlight and fresh air and in certain farms she will remain in total darkness during the night or under artificial light.

Many inhumane conditions can lead to the sow’s internal organs and tissue protruding out of the body in what is called a prolapse. Lying on the hard surface of the floors for long periods of time leads to pressure sores all over the sow’s body. The confinement also leads to weakened muscles which makes it difficult for the sow to remain standing and causing her to fall on her piglets, often crushing and killing them.

Add to all that the constant staff abuse like cutting and kicking, and both sows and their piglets become susceptible to a wide range of unnecessary injuries.

Narrated by Lindsay McDougall, Lucent explores the dark side of Australia’s pig farming industry. The film highlights the blatant cruelty that is accepted within the industry as standard practice. Viewer discretion is advised as you watch this uncomfortable film.

From the beginning of this world’s history, humans have had a somewhat cruel dominion over other living creatures. The excuse has always been that animals do not have a soul, but in the words of M.

Steve Jobs died in early October of 2011, but not before re-inventing the personal computer, the animation film industry, the music industry, the phone industry, etc, etc.

This documentary explores the complex relationship between coastal Cajuns in Louisiana and the oil and gas industry. It follows the Terrebone family and their seafood business.

This award-winning documentary, originally released in 2010, tells the true story of a medical doctor and PhD biochemist named Dr. Stanislaw Burzynski, founder of the Burzynski Research Institute, a bio-pharmaceutical company that is committed to developing cancer treatments based on genomic and epigenomic principles.