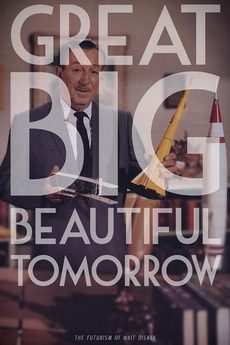 This documentary features original footage and interviews with various Disney legends and historians along with valuable archival material that are the property of The Walt Disney Company.

The name Walt Disney means different things to different people. For some it’s about princesses and fairytales while others see it as a multimillion-dollar media conglomerate. The name also invokes deep feelings of positivity, progress, and the enduring belief that tomorrow can always be better than today.

In the decades following his death, many stories have been written about his life and his legacy. Sadly, not all the publications have been true or positive.

Great Big Beautiful Tomorrow takes a close look at the various technologies that Walt Disney developed over the course of his life since it’s no secret that Disney loved inventors and gadgets. But the film also takes a look at the man himself.

At a time when women, Jews, and African Americans were considered as second-class citizens, Walt hired people of all races and religions to work in his company in varying prestigious positions. Those who worked for him remember that he talked directly with anybody who was doing anything. There were no layers of organization in his eyes. He cut through all of the levels, and made each employee feel that his or her contribution was valuable. Walt took the time to get to know what his employees were like and what they were interested in.

From 1928 to 1937, animated films went through an astounding evolution beginning with Steamboat Willie. This constant growth was specifically engineered to achieve Walt’s dream. Some thought that what he aspired to accomplish was impossible. Others thought it was simply absurd.

Walt Disney knew that if he wanted to make money and promote his studio, he would have to go into feature films. So when he announced that he was planning to create a feature-length animated film, people thought he had lost his mind. Then when he stated that the film would not include Mickey Mouse, the Three Little Pigs or any other established Disney character, his project began to be ridiculed as ‘Disney’s Folly’.

To make matters worse, he started getting complaints from parent groups and religious groups because they believed that the bright colors would ruin the eyesight of small children and make them hyperactive. This was something that no one had ever done before and so there was no past experience to use as a comparison.

Still Walt kept going in spite of the criticism and the lack of funds. The film ended up costing about six times what had been budgeted. But on December 31, 1937 it premiered taking everybody by surprise. When it went into general release in January 1938, it became the highest grossing film of all time. The rest, as they say, is history.

Whether you’re a Disney fan or not, you need to watch this film now.

Visual effects artists work behind the scene creating some of the most iconic and mind-blowing effects in the movies we love.

The oceans cover 71% of the surface of the earth and they provide us with the oxygen we need. Under the surface the oceans hold wonders we can scarcely imagine.