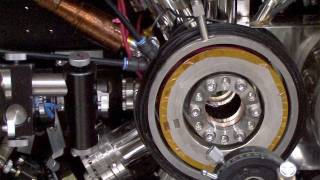 Join Dr. Steve Jefferts of the National Institute of Standards and Technology in Boulder, Colorado as he explains why atomic clocks are so extremely important in our everyday lives. Dr. Jefferts is an expert on how we measure time and he even co-developed one of the world’s most accurate atomic clocks. But why do we need such accuracy?

Nature provides a bunch of clocks. In the past these natural clocks were used to tell time. For example: the sun rising and setting marks the day and the moon marks the month.

Atomic clocks measure the oscilation between the nucleus of the atom and the surrounding electrons. Unlike a normal commercial clock which might lose or gain a second every now and then, atomic clocks are the most accurate time-keepers in the world.

Without them GPS navigation would be impossible, the Internet would not synchronize, and the position of the planets would not be determined accurately enough to launch and monitor space probes and landers.

In 2006, Andrew Miners’ vision was to build an eco-resort and center for marine conservation in West Papua, Indonesia. This place holds the world’s most bio diverse marine habitat.

One response to “The Amazing Atomic Clock”