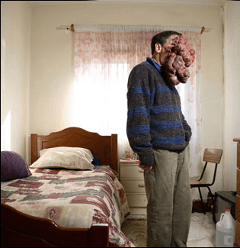 The Man With No Face

For the past 35 years, 51 year-old Jose Mestre, from Lisbon, has been losing his face to a massive growth, distorting it out of all recognition – and it’s still growing.

The tumour on Jose’s face is a vascular malformation, a collection of blood vessels that have expanded, producing a raised red area on the skin. Jose was born with a strawberry-coloured birth mark on his upper lip; at puberty his face started growing, eventually smothering his lips, nose and one of his eyes. It’s now about 33cm long and weighs around 3kg.

The Man with No Face meets the man behind the ‘mask’ and attempts to understand what it is like to have such an affliction. How does he cope with day to day life – with the stares, the ridicule and people taking photographs?

Surrounded by a loving family, it seems incredible that he has not been treated and his face was allowed to grow so big. However, through years of medical misinformation, some misdiagnosis, lack of finances, and reluctance to undergo treatment due to religious beliefs, the growth has continued to obliterate his face.

My Shocking Story follows Jose on a journey through Europe to seek medical advice for one last chance to stop his face from suffocating him. In this journey of a lifetime he will discover the truth about his condition, as he travels by train, via Paris, to Britain, to meet the top experts in London. He will go through a series of tests, consultations, and meet other patients with a similar affliction. Here he will also spend time with his brother and the rest of his family, enjoy being a tourist in London, while making the biggest decision of his life:

Jose’s dream is to live a long and normal life. Will he decide to change his religious beliefs, and risk an operation to remove his malformation, or will he decide against surgery and accept that he will continue living the rest of his life without a face?

Beliefs, and believers, come in many shapes and sizes, and not all of them can be described as religious. This programme provides an introduction to a fascinating range of non-religious people and their beliefs.

4 responses to “The Man With No Face”